Nancy Plencner
Fountain Hills State Legislative Team comprised of Senator John Kavanagh, Representative Joseph Chaplik and Freshman Representative Alex Kolodin had the Community Center rocking at the Fountain Hills Republican Club's meeting January 21.  Their Legislative Report was peppered with humor folded into a clear sense of direction and governance to benefit Arizonans.
Always entertaining Senator John Kavanagh was hitting home runs as he outlined the dozens of bills that are sure to drive the other party crazy.  As Chairman of Appropriations in the Senate he is working closely with Representative Joseph Chaplik now in his second term and a leader in the Freedom Caucus.  With slim margins Republicans have in both the House and Senate it's important to work together on the passage of key bills.  The Appropriations Committee focuses on the State Budget and how the money is spent.  These two Appropriation's Chairmen can have a big impact on where, when and how much of the government's money is made available.  In fact the use of money will be a key leverage in keeping the far left policies of Governor Hobbs in check.
Representative Kolodin a fiery attorney said there are two ways to govern, one is send Legislature passed bills to the Governor for signing into law or given the reality of Republican control of the Legislature and the Governor's far left agenda it may well be that Kolodin's Plan B will be utilized.  Which is Referring issues directly to the voters of Arizona.  Knowing Hobbs is not likely to sign anything we send her he said, we have the option of a direct approach, put the issues before the people of Arizona to vote on.  Kolodin also proposes to exercise legislative oversight power.  It is the legislature that is the watch dog to determine if illegalities are taking place, to determine if the laws as passed are duly enforced and finally to KILL STUPID BILLS!  Some examples given of issues that might be referred to the ballot are: eliminate the state income tax, break up the size of Maricopa County...smaller is more efficient.
Representative Chaplik who came within a couple of votes of being elected Speaker of the House reports the Freshman class at the State Capitol is comprised of many conservative, hard working new legislators and he is eager to work with them.  Representative Chaplik is focused on citizen's right to privacy, on his radar are businesses who will not take cash!  His Bill would ban that practice.  The risk of a cash less system would guarantee every purchase could be tracked by the government.
Senator Kavanagh takes the award for introducing the most Bills!  A small sample; written parental permission must be obtained for a student  to be allowed to use a different pronoun or name than what is on the school record. Another education related bill, if parents sue the school, and lose (exemption is if the suit is frivolous) they are no longer responsible for massive legal costs incurred by the School District.  Establish Free Speech Zones, on every campus including universities where any opinions and open speech is allowed....and for those wanting to destroy public monuments  Kavanagh proposes huge fines be levied.  Homeless issues, no begging or sleeping on streets.
The Appropriation Committee in each chamber holds hearings on and must vote to approve for passage by the entire body any and all bills that spend general fund monies, principally the state budget. Committee members also serve on the Joint Legislative Budget Committee and Joint  Legislative Committee for Capital Review, which must approve items like lawsuit settlements and construction projects.

2023 is starting out to be a very exciting year politically.  If you get bored, go to Town Council meetings the first and third Tuesday, catch the action going on at the State Legislature, or attend the FH School Board meetings the second and fourth Wednesday's which are getting interesting.
Thank goodness Fountain Hills has become an Island of Sanity!  With a Majority on the FH Town Council taking care of business, school Board fighters Libby and Madicyn and the Threesome of Kolodin, Chaplin and Kavanagh at the Capitol we here in Fountain Hills are being well served.
The Slate of Officers for the FH Republican Club were duly elected and sworn in by Senator Kavanagh.  President Cecil Yates and 1st Vice Chair Boe James following the swearing in. 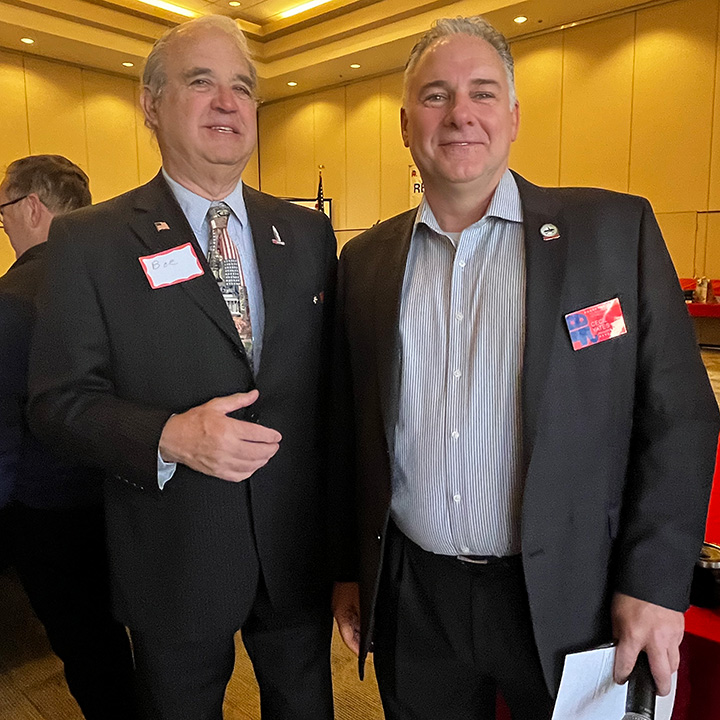